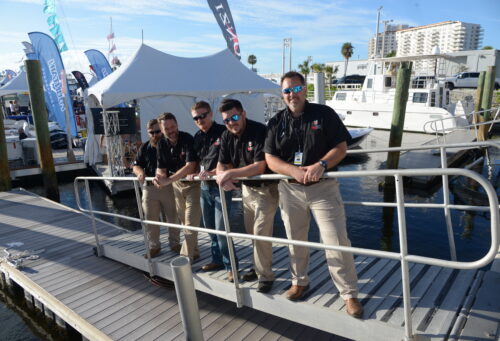 ABSI, a local company focused on unmanned aviation systems for the defense and commercial sectors, demonstrated the intelligence, surveillance and reconnaissance (ISR) and counter-UAS capabilities of its joint venture, redUAS at the Fort Lauderdale International Boat Show in November. Deploying operators from ABSI and other partner companies, redUAS was tapped by security providers at the Fort Lauderdale International Boat Show to keep the skies over the show safe and free of unauthorized or malicious drones.

In an environment where drones are proliferating and many hobbyist operators fly without awareness of FAA rules and airspace regulations, trade show and event operators face increasing security risks from above. Security organizers at the FLIBS brought in redUAS to provide an additional layer of security, aware that an outdoor venue covering six miles of floating docs and containing assets worth roughly $4 billion would be a target for curious hobbyists or non-paying visitors looking to capture interesting aerial footage.

“It’s easy to throw a camera-equipped drone in the air today,” Chris Sacco, ABSI CEO and Managing Partner of redUAS noted. “And there’s a general lack of education and awareness of the rules, so many hobbyists don’t know that the airspace around the show is restricted, that they can’t legally operate overhead, or that drones can’t be legally operated beyond the operator’s line of sight without the proper waivers. We operated from rooftops and on the ground to identify and locate intruder drones and their operators, coordinating with local law enforcement and show management to keep the show, crowd and assets safe.”

ABSI and other redUAS operators utilized a combination of cutting-edge technologies and military-based tactics, techniques, and procedures to keep the skies, boats and visitors safe at the world’s largest boat show in Fort Lauderdale in early November.

“Domestic counter-UAS is a quickly evolving arena,” Sacco noted. “Though many companies advertise jamming, nets and other kinetic means of countering the malicious use of drones, generally those tactics are illegal under current FAA regulations concerning unmanned aircraft. redUAS is the only service provider offering a safe and effective method of dealing with intruder UAS in concert with local law enforcement for events and high-value targets.”

The redUAS team was directly integrated with the on-site security in place at the show, and drone operators worked directly with local law enforcement, FBI, and show security to monitor, detect, identify—and in some cases, prosecute—intruder drones flying over the boat show illegally. “Our team successfully passed location information and maintained visual contact with the intruding drones until they either landed or went out of observable range. We were able to pass position information to our LE/FBI partners here, and they went and knocked on doors and broke the bad news to the offenders.”